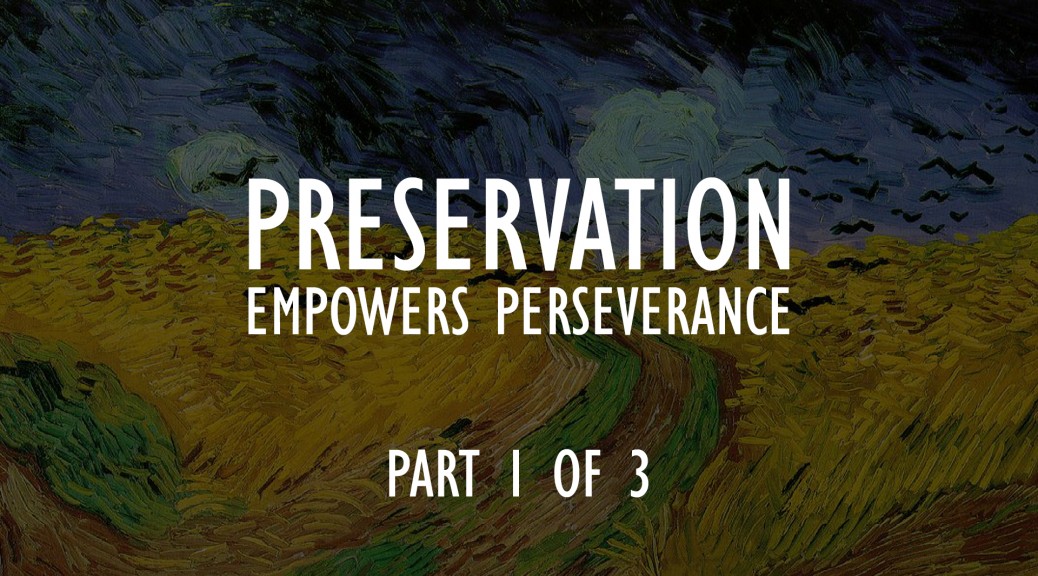 We see restlessness all around us don’t we? Violence and words of malice that strike at the very core of who we are. At this point I sort of a dread having to open my Facebook page to see the hate of everyday. For whatever reason, each of us can so quickly be spun into this web of poison.The funny thing is that as I describe this situation, several things may pop into YOUR head. It may not necessarily be what I’m thinking about. Because each of us have a bone to pick with something.

We all have THAT THING that really gets us all riled up.
WE all want to WIN or persevere. Not only that, we all want OUR way preserved. We want the world to think, act and feel the way we do. We want to be preserved and persevere.
We wonder why we are in the situation we’re in and it cause us to be full of fear. If we are honest with ourselves. Am i the only one that feels this way? Don’t you at least feel it around you if not right here, right now. That is if the situation you are currently doesn’t pan out to be the way YOU want, well everything must be wrong with the world.

Over the next couple of weeks we’ll be looking at the ‘3 Characteristics of How God’s Preservation Empowers Perseverance And Witness’ based off of Acts 18:1-17.

God Empowers Through the Faith Family

After this Paul left Athens and went to Corinth. And he found a Jew named Aquila, a native of Pontus, recently come from Italy with his wife Priscilla, because Claudius had commanded all the Jews to leave Rome. And he went to see them, and because he was of the same trade he stayed with them and worked, for they were tentmakers by trade. And he reasoned in the synagogue every Sabbath, and tried to persuade Jews and Greeks.

When Silas and Timothy arrived from Macedonia, Paul was occupied with the word, testifying to the Jews that the Christ was Jesus. And when they opposed and reviled him, he shook out his garments and said to them, “Your blood be on your own heads! I am innocent. From now on I will go to the Gentiles.” And he left there and went to the house of a man named Titius Justus, a worshiper of God. His house was next door to the synagogue. Crispus, the ruler of the synagogue, believed in the Lord, together with his entire household. And many of the Corinthians hearing Paul believed and were baptized. – Acts 18:1-8

If you see in the beginning there was an availability by the saints. Aquila and his wife Priscilla were model church members that were ready, willing and available. People knew each other, or at least they found ways to be involved with each other. Everything will be added to you God will bring you the resources you need, including faithful community to surround you to accomplish God’s mission WITH you. For the faith family to be useful and active they were all readily available.

It has always been speculated what Paul’s ‘thorn’ is in the passage in 2 Corinthians. But what we do know is that whatever it was, it could not be taken away. Most likely, Paul needing some sort of help and couldn’t do everything by himself. There is help. The body of Christ; Aquila and Priscilla ready in and out of season were ready to be of assistance. In fact, they all had a similar trade.

They did all their WORK for the glory of God – (v.3) Paul being a tent maker uses this profession as a means of networking for God’s glory. In other words, it is not the case that Paul engages in tent making as a necessity so that he can do his “real job” of preaching. Instead, Paul’s varieties of work in the sewing shop, marketplace, synagogue, lecture hall, and prison are all forms of witness. In any of these contexts, Paul participates in God’s restorative project and lives out his new identity in Christ for the sake of God’s glory and out of love for his neighbors—even his former enemies. Even as he is being transported across the sea as a prisoner, he employs his gifts of leadership and encouragement to guide the soldiers and sailors holding him captive to safety during a severe storm (Acts 27:27-38). If he had not had the gift of being a preacher and apostle, he would still have been a witness to Christ simply by the way he engaged in making tents, toiling for the sake of the community, and working for the good of others in all situations.

We must make sure we don’t make distinctions that separate us from the every day, every moment actuality of our faith and the implications it will always present. In every way Paul was who he had to be in order to share Christ. So with out excuse we must be faithful to be Christians, and present to do the work of ministry.

[9] And when I was with you and was in need, I did not burden anyone, for the brothers who came from Macedonia supplied my need. So I refrained and will refrain from burdening you in any way. – 2 Corinthians 11:9

Based off of this coinciding scripture which most likely points to this point in Paul’s second journey, when Silas and timothy ‘arrived from Macedonia’, in verse 5 is probably part of the gift that they bring to Paul.
This piece is always so interesting. But the people in the early church always took care of one another. The piece that is important to note about this community action is the manner in which they help each other.

You don’t have to ‘start a ministry’ to be faithful. Just be it, Just do it. You never know the actions you take, how many years down the line that it’s going to affect someone’s life. In my life, I was only 8 years old. My father had just had been in a real bad place. The cards just didn’t fall in his lap right. It’s the sudden lay-off, the sudden drop in pay and the inevitable hardship that follows when the money you make doesn’t fit the outgoing bills. My parents loved the LORD, they were faithful in sharing Jesus with their friends and the LORD provided so many resources through those around us.

There are always those people right. All of us a story or two that carry examples of servants that really went out of their way to be like Jesus to us. Be like that. And i think more than ever these realities hit me as an adult knowing the risk families took by allowing us to live with them and take us in.
Even now, there are people in this body that love us, my family, in ways that truly speak to us and care that helps and motivates me to speak truth boldly. For them I am so grateful.

Following after such great examples like Aquila, Priscilla, Silas and Timothy. There are so many arenas that right now you can help your faith family with. That you, can help advance the kingdom and make a difference. Really there are three main things most churches do. Consider the following

I believe that if we as a local body does 3 things really well, we can be most effective at accomplishing the great commission in your city. This is our field. Your city is your inheritance. AS a team that is filled with the fire of the Spirit to be witnesses to your hurting community, we can do it together.