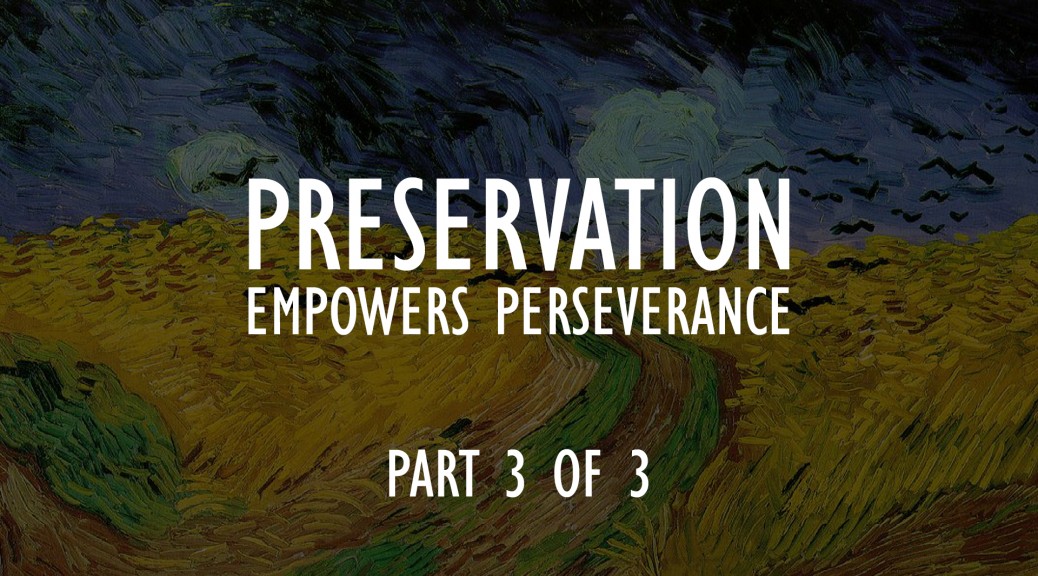 In part 3 in this blog series we look at the final mark of how God preserves His people to persevere.

When Silas and Timothy arrived from Macedonia, Paul was occupied with the word, testifying to the Jews that the Christ was Jesus. And when they opposed and reviled him, he shook out his garments and said to them, “Your blood be on your own heads! I am innocent. From now on I will go to the Gentiles.” And he left there and went to the house of a man named Titius Justus, a worshiper of God. His house was next door to the synagogue. Crispus, the ruler of the synagogue, believed in the Lord, together with his entire household. And many of the Corinthians hearing Paul believed and were baptized. And the Lord said to Paul one night in a vision, “Do not be afraid, but go on speaking and do not be silent, for I am with you, and no one will attack you to harm you, for I have many in this city who are my people.” And he stayed a year and six months, teaching the word of God among them. (Acts 18:5-11 ESV)

Jesus the WORD, is the game changer

In verse 5, there is a change in how the discussions go with the Jews. Once the deity and gospel message of Jesus is pressed, the scene changes. While being ‘occupied with the WORD”, we can only imagine the deep study and Holy Spirit filled insight Paul was receiving from God. I truly believe what Paul is seeing here, is redemptive history being made complete through Christ. It says this in Hebrews 1:1-4.

Long ago, at many times and in many ways, God spoke to our fathers by the prophets, but in these last days he has spoken to us by his Son, whom he appointed the heir of all things, through whom also he created the world. He is the radiance of the glory of God and the exact imprint of his nature, and he upholds the universe by the word of his power. After making purification for sins, he sat down at the right hand of the Majesty on high, having become as much superior to angels as the name he has inherited is more excellent than theirs.

Let the word occupy your life. Paul was Christ-centered in his preaching. And it cost him everything, and here it cost him a huge conflict with those he was preaching to.

I remember speaking with a friend, and him saying to me, “I think loving Jesus is really OK, it’s just when you start saying He is the only way to God that I have a real problem with”. This is the norm, and if you preach God’s truth in it’s entirety, Jesus will guarantee to offend.

Use His Word as a Guide

Whereas the last vision Paul had was of someone telling him to go somewhere he hadn’t expected (Acts 16:9), in Corinth he has a vision telling him to stay put (Acts 18:9-10). Presumably Paul needed that encouragement. Visions, both in the New Testament and in much later experience, are not normally granted just for the sake of it. ((Wright, N. T. (n.d.). Acts (N. T. Wright for Everyone Bible Study Guides).)) One of the many lessons Acts teaches quietly, as it goes along, is that you tend to get the guidance you need when you need it. In 18:6 Paul seems frustrated. In verses 9–10 God speaks to Paul, encouraging him to remain in Corinth despite his frustrations, because God apparently has many people to bring to faith there. In the face of opposition, God steps in with faithful love to strengthen Paul’s resolve. ((Holcomb, J. S. (n.d.). Acts: A 12-Week Study (Knowing the Bible) .))

We ought to desire His presence. It may not be explicit in this immediate text, but as a side door observation of how we ought to desire God in every circumstance. We hear this echoed in Moses’ plea, …

God is with you.

The LORD here reassures Paul of so many things. For one thing, He mentions that He has many that are His. Of course here, Jesus is talking about those that He has predestined as His own as it says in our text in verse 9. God has everything under control for Paul, because His people are already secured. This should give us encouragement in our evangelism efforts. Your job is to preach. God’s job is to save.

It is important for us to see that God reaches down to us in the nitty-gritty messiness of life to say, “DO NOT BE AFRAID”!

Whatever you are feeling today, I wish that whatever you are holding on to instead of Christ is fading and hopeless. The WORD of God is enough. God has already preserved us. This is the big idea of the blog today. It’s that Jesus has already claimed his own. You and me. In fact, He defeated death forever if you are indeed in Christ. And we have a hope that can never be shaken and a community that will never die. You can’t do it on your own. By your own devices you have lost, but see Christ has already won the war. We can run with confidence into the battle because Christ has already won the war! There is hope. He is our hope.

Paul was in a great deal of discouragement after dealing with the Jews. In fact, we don’t know exactly why He was so distraught to have the LORD himself tell Paul his encouraging words. But what we do know is that the feeling Paul may have been feeling is the tendency we all can get when the going gets tough. When you are losing and there seems like there is no hope. Maybe it’s when you are winning… Paul just got done seeing the miracle of salvation made manifest right before his eyes by seeing whole households come to faith!

When Israel was delivered from the hand of the Egyptians they were being preserved by God by getting daily rations of manna by a daily miracle from THE LORD. God was preserving them. He was holding them. Some though would try and double up their portion… “just in case” God didn’t come through. They were not trusting in the LORD. See, the book of John talks about how in the beginning was the Word and the Word was with God. This is Jesus. He has already in eternity past ordained everything you need for His plan to happen and for your eventual good to come to pass.

The message of the Gospel is unmerited preservation! When God sent His son to die for sinners. It was a message of love. Through everything you do, everything you aspire to be. All of it will never be good enough. It’ll never be. You cannot preserve yourself, for you will die. Only one outside of you can ever preserve you. Can a man who is dead in the ocean ever be brought back to life on his own, or does he need help from someone else? He needs help from someone else.

For it says in Ephesians Chapter 2…

And you were dead in the trespasses and sins in which you once walked, following the course of this world, following the prince of the power of the air, the spirit that is now at work in the sons of disobedience—among whom we all once lived in the passions of our flesh, carrying out the desires of the body and the mind, and were by nature children of wrath, like the rest of mankind. But God, being rich in mercy, because of the great love with which he loved us, even when we were dead in our trespasses, made us alive together with Christ—by grace you have been saved—and raised us up with him and seated us with him in the heavenly places in Christ Jesus, so that in the coming ages he might show the immeasurable riches of his grace in kindness toward us in Christ Jesus. (Ephesians 2:1-7 ESV)

But he said to me, “My grace is sufficient for you, for my power is made perfect in weakness.” Therefore I will boast all the more gladly of my weaknesses, so that the power of Christ may rest upon me. For the sake of Christ, then, I am content with weaknesses, insults, hardships, persecutions, and calamities. For when I am weak, then I am strong.
(2 Corinthians 12:9-10 ESV)

That very preservation God gives motivates and empowers us to persevere!