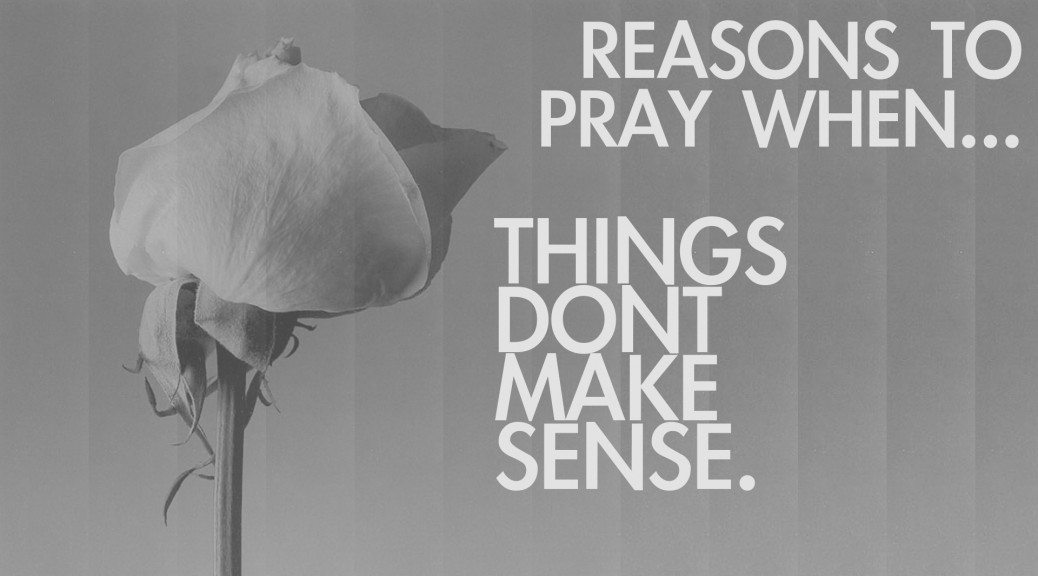 I vividly remember the phone call I got late that night. I knew that at some point my brother was to come home. I was just hanging out watching TV and, “ring ring…”. I answer the phone call and it’s the authorities letting me know that my brother had gotten in an accident and is unconscious. It was me and my parents at home that night. I remember us and people from the church praying and asking God to have mercy and deliver him, there was no script, there was no perfect way of saying it, but what we were saying was, “God, spare my brother’s life… please God, Spare my brother’s life.” I knew, somewhere deep inside to pray, we had nothing, there was absolutely nothing to grab a hold of at the moment except God. For this particular story, my brother was miraculously spared. I know this is not always the case, but we were overjoyed that he was conscious again by the time he reached the ER.
We all have a story like that don’t we? Sometimes it is filled with doubt, maybe you don’t have all the facts, but you are begging God to deliver, you, a friend, maybe a marriage for deliverance from danger. We want God to move, we want Him to change things. We want Him to move on our behalf.  So what are some reasons to continue to pray when things don’t make sense?

1. Because God is Sovereign

The whole concept of God’s complete sovereignty is a hard one for a lot of people to swallow. We want some sure way of understanding everything we see.
“Our God is in the heavens; He does whatever He pleases” (Ps. 115:3). “Whatever the Lord pleases, He does, in heaven and in earth, in the seas and in all deeps” (Ps. 135:6). He “works all things after the counsel of His will” (Eph. 1:11). “From Him and through Him and to Him are all things” (Rom. 11:36). “For us there is but one God, the Father, from whom are all things, and we exist for Him; and one Lord, Jesus Christ, by whom are all things, and we exist through Him” (1 Cor. 8:6).
Long story short here is that God does what he wants and the early church understood as the context of their prayers. Even in times of uncertainty, they trusted God to do His work, His will and in His way. We know this was true because we see a prayer in the midst of persecution early in the Book of Acts.

“Sovereign Lord, who made the heaven and the earth and the sea and everything in them,… for truly in this city there were gathered together against your holy servant Jesus, whom you anointed, both Herod and Pontius Pilate, along with the Gentiles and the peoples of Israel, to do whatever your hand and your plan had predestined to take place.

The people knew exactly what was going on, and they knew it’s been part of God’s plan all along.
There is no “secret way” of knowing how God will judge. Fervent prayer is how the church must operate in our core. It is this kind of faithfulness that will spread the church to the ends of the earth.
In a way, by God being Holy, by very definition, He does what He wants. There will not be expected conclusions to how God interacts with us, but we are to pray for God’s revealed will since we don’t know His hidden will.

Yes. Pray. God is sovereign. Pray. Remember, the communication we have with God is one that should be unceasing. Pray when you want God to move in your life and in your community’s life. Pray for the souls of those you are reaching for Christ. Pray in the context knowing that God has a plan in the midst of your confusion.

2. Because We Are Not Alone

So Peter was kept in prison, but earnest prayer for him was made to God by the church… When he realized this, he went to the house of Mary, the mother of John whose other name was Mark, where many were gathered together and were praying. And when he knocked at the door of the gateway, a servant girl named Rhoda came to answer. Recognizing Peter’s voice, in her joy she did not open the gate but ran in and reported that Peter was standing at the gate. They said to her, “You are out of your mind.” But she kept insisting that it was so, and they kept saying, “It is his angel!” But Peter continued knocking, and when they opened, they saw him and were amazed. But motioning to them with his hand to be silent, he described to them how the Lord had brought him out of the prison. And he said, “Tell these things to James and to the brothers.” Then he departed and went to another place. (Acts 12:5,12-17 ESV)

Within the context of what was spoken of earlier in Acts 4, and the prayer that the community of faith said together, there is just something about all of these passages that make the most difficult things just a little easier to swallow; it is that we are not alone.

And if it’s a true community, it’s gonna be real. It’s gonna be messy, and it’s not gonna be perfect. A community full of faith in God and love for one another is a community that is authentic. You can see this authenticity here in this passage when you get to the nitty gritty of how the community responds… during a prayer meeting on behalf of Peter seeking God’s provision.

There are people that are dealing with doubts, fears, and uncertainty. Here, they definitely made it obvious in scripture. Are you being this honest? This how we edify and build one another up.

3. Because He Always Hears Us

So Peter was kept in prison, but earnest prayer for him was made to God by the church. (Acts 12:5 ESV)

In Verse 5 the ESV reads as ‘earnest’ prayer, This word is only used a few times in the NT. It is a very strong word meaning “to reach out in a tense, resolute eager way” or “Prayer was going up”. This means they were praying intensely, with resolve and had an expectation to see God answer. Nothing else mattered but God and His everlasting kingdom!
Fervant or earnest prayer is how the church must operate in our very DNA. It is this kind of faithfulness that will spread the church to the ends of the earth.
Luke, who is the writer of Acts uses this word in another place in scripture.

And being in an agony he prayed more earnestly; and his sweat became like great drops of blood falling down to the ground. (Luke 22:44 ESV)

Hopefully we can see this intensity noted by our Lord as He is praying earnestly before getting betrayed and all the emotion that is tied knowing is to become of you being in the governments hands.
The important aspect to note about the Lord listening to His children, is noticing that our Lord prayed earnestly, but He earnestly asked for His Father to do His will. In this prayer Jesus did not sin by asking God to take the cup from Him if there was another way.

The big difference between our sometimes fleshly prayers and that of our Savior King Jesus is that He desired His Father’s will above anything else, yes, even if that meant dying a cruel death on a bloody cross for us while we were still sinners.

Praying according to His will is the key. Praying that God has His way. It’s the heart of the matter where we don’t expect God to align to our desires but our desires to be aligned with His.
When you pray, and the answer doesn’t turn out for the good you expect, does not mean that God is mean, nor does it always mean you don’t have enough faith. It just means that sometimes the answer is no, sometimes it’s yes and sometimes it’s wait.
You might feel like the father in the Gospel of Mark with the sick son.

It’s all about Jesus and caring for one another.

He is a good father and He listens to His children. He doesn’t always answer the way we want, but He does hear us.